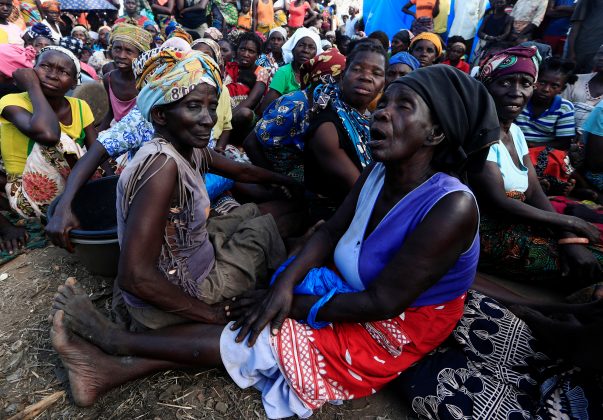 FILE PHOTO: Women wait to receive aid at a camp for the people displaced in the aftermath of Cyclone Idai in John Segredo near Beira, Mozambique March 31, 2019. REUTERS/Zohra Bensemra

JOHANNESBURG (Reuters) – One month after Cyclone Idai tore through southern Africa bringing devastating floods, aid agencies say the situation remains critical with some communities in worst-hit Mozambique only just being reached with aid.

The storm made landfall in Mozambique on March 14, flattening the port city of Beira before moving inland to batter Malawi and Zimbabwe.

It heaped rain on the region’s highlands that then flowed back into Mozambique, leaving an area the size of Luxembourg under water. More than 1,000 people died across the three countries, and the World Bank has estimated more than $2 billion will be needed for them to recover. 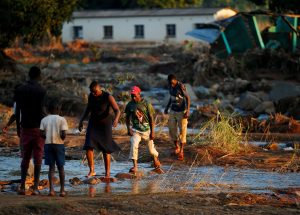 Over the weekend, aid agencies said thousands of people were still completely cut off and warned of the potential for a catastrophic hunger crisis to take hold, especially as aid appeals went largely underfunded.

Dorothy Sang, Oxfam’s humanitarian advocacy manager, said an aid drop was being planned for an isolated area where just last week 2,000 people were found for the first time since the storm. They had been surviving on coconuts, dates and small fish they could catch.

Oxfam estimates there are 4,000 people still cut off. Sang added that while often these weren’t the worst-hit by the disaster, they were already living in chronic poverty and now face huge challenges to survive.

On Sunday, Care International said the destruction of crops would compound existing food security problems across the region, and called on donors to find additional funds for the response.

Mozambique’s $337 million humanitarian response plan, largely made up of an appeal for $281 million after the cyclone hit, remained only 23 percent funded on Monday.

The United Nations has also requested $294 million for Zimbabwe, an appeal currently 11 percent funded. The government has separately asked for $613 million to help with the humanitarian crisis.

Meanwhile, U.N. children’s agency Unicef warned at least 1.6 million children need some kind of urgent assistance, from healthcare to education, across all three countries. Save the Children also said many are traumatized after witnessing the death and destruction wrought by the storm.

“After a disaster of this scale, the world must not look away.”