Pastor Jim Bakker, host and founder of The Jim Bakker Show, is a pioneer of Christian Television. From humble beginnings, he rose to build one of the largest ministries in the world. His life is proof of the power of God’s restoration and grace.

As a young man, Jim was called to “make Jesus real” to the world. During the golden era of television, he was divinely inspired to use this new medium. In the 1960s, he joined the Christian Broadcasting Network under the direction of Pat Robertson. Jim developed one of the first daily, one-hour, kids’ shows for Christians called Come On Over. He also later became the first host of a ground-breaking talk show called The 700 Club, featuring many of the top ministers and singers of the day.

After eight years at CBN, the Lord led Jim back into a traveling ministry, helping to plant and start many television ministries around the country. Jim and his family soon joined Paul and Jan Crouch in California to pioneer a new television ministry. Jim was the first President and a founder of Trinity Broadcasting Network, which today, still beams around the world with 24-hour a day Christian programming.

In 1974, Pastor Jim relocated to Charlotte, North Carolina to birth several of the most dynamic ministries the world has ever known including The PTL Club, The Inspirational Network, and a state of the art Christian retreat center called Heritage USA. Through these ministries, they recorded over ten million salvations through phone calls, feedback cards, and on-campus ministry.

After 13 years of developing and expanding Heritage USA, Pastor Jim Bakker was forced to resign. PTL, under new management, soon found its way into bankruptcy. Jim became the target of a lawsuit, and in 1989, he was indicted and sentenced to forty-five years in prison.

While in prison, Jim turned to his Bible and found a deeper walk with the Lord than he ever experienced before. Throughout five years, Jim intensely studied the book of Revelation and received a call from God to be a watchman, always looking ahead for the return of the Lord.

A few years later, thanks to the efforts of men like Alan Dershowitz and James Albert, Jim’s appeal was won. On July 1, 1994, Jim was released on parole after serving five years in prison. Jim was invited to many churches to share his testimony, and to begin sharing what he had learned in the book of Revelation.

In 1998, while working in the inner-city ministry of the Dream Center of Los Angeles, Jim met Lori Graham. They married that year and have totally dedicated their lives to ministry.

In 2002, Jim and Lori were blessed with the happiness of expanding their family with nine children from the inner-city of Phoenix where Lori had ministered for years. In that same year, Jim and Lori were offered the opportunity to move to Branson, Missouri where they would begin The New Jim Bakker Show. 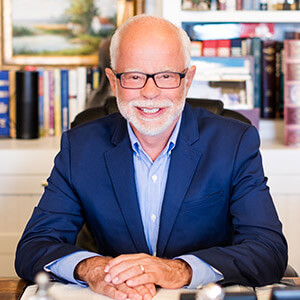 In 2003, sixteen years to the date that Pastor Jim had made his last broadcast from PTL, he and Lori launched their new television ministry. Today, The Jim Bakker Show is broadcast throughout the United States, Canada, and the entire world through multiple broadcasts on Directv, Dish Network, Roku, Live streaming on jimbakkershow.com and many more outlets, reaching a potential audience of 1.6 billion people.

The show is broadcast from a Christian Retreat Center called Morningside USA located just outside Branson, Missouri. This 700-acre property is a thriving Christian community that also serves as the backlot for The Jim Bakker Show and other outreach ministries including Lori’s House, a safe, supportive home for pregnant women in difficult situations.

Pastor Jim is considered to be one of today’s experts on the Book of Revelation. Since prison, he authored I Was Wrong, The Refuge, Prosperity and The Coming Apocalypse, and Time Has Come. In 2020, Jim launched the PTL: Voice of the Prophets Network, a 24-hour network carrying the most important messages from the prophets and watchmen of today.

On this episode of The Jim Bakker Show: Pastor Jim and Lori welcome Laurie Ditto

On this episode of The Jim Bakker Show: Pastor Jim and Lori welcome Laurie Ditto

On this episode of The Jim Bakker Show: Philip Cameron

On this episode of The Jim Bakker Show: Philip Cameron

On this episode of The Jim Bakker Show: Pastor Jim and Lori welcome Bobby Conner