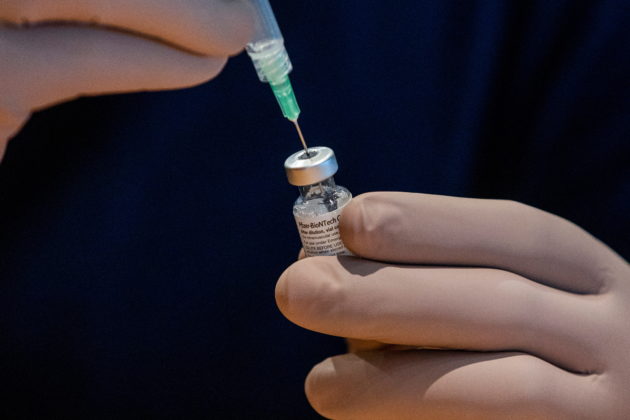 FILE PHOTO: A healthcare worker prepares a dose of the Pfizer/BioNTech coronavirus disease (COVID-19) vaccine, which was authorized by Canada to be used for children aged 12 to 15, at Woodbine Racetrack pop-up vaccine clinic in Toronto, Ontario, Canada May 5, 2021. REUTERS/Carlos Osorio

(Reuters) – The following is a roundup of some of the latest scientific studies on the novel coronavirus and efforts to find treatments and vaccines for COVID-19, the illness caused by the virus.

Delaying the second dose of the Pfizer/BioNTech COVID-19 vaccine beyond the originally recommended three-week gap used by the companies in clinical trials appears to induce a stronger antibody response in the elderly, UK researchers found. Shortly after the vaccine became available, UK health officials advised that the second dose should be given 12 weeks after the first to allow more people to get protected by a first dose early on. In a new paper seen by Reuters and expected to appear on medRxiv on Friday ahead of peer review, researchers found that among 175 people ages 80 to 99, those who got their second dose at 12 weeks had antibody responses that were 3.5 times higher than those who got it after three weeks. Antibodies are only one part of the immune system, and vaccines also generate T cells that fight infections. The peak T cell responses were higher in the group with a three-week interval between doses, and the authors cautioned against drawing conclusions on how protected individuals were based on which dosing schedule they received.

The known increased risk of severe COVID-19 and death linked to obesity may be even more pronounced for men than women, new data suggest. Researchers studied 3,530 hospitalized COVID-19 patients with an average age of 65, including 1,469 who were obese. In men, moderate obesity was associated with a significantly higher risk of developing severe disease, needing mechanical breathing assistance and dying from COVID-19. (The threshold for moderate obesity is a body mass index (BMI) of 35. In an 5-foot, five-inch tall (1.65 m) adult, that would correspond to a weight of 210 pounds (95 kg). In women, however, only a BMI of 40 or higher, indicating severe obesity, was linked with the increased risks. In a report published in European Journal of Clinical Microbiology & Infectious Diseases, the researchers note that while obesity is known to be linked with body-wide inflammation, patients’ levels of inflammatory proteins did not appear to explain the association between obesity and severe illness. For now, they conclude, “particular attention should be paid” to protecting patients with obesity from the coronavirus, “with priority to vaccination access, remote work, telemedicine, and other measures given the higher risk of adverse outcomes once they are diagnosed with COVID-19.”

Sick Americans appear to be passing up opportunities to get tested for coronavirus and thus are likely unknowingly spreading the infection throughout their communities, new research shows. Among 37,000 adults across the United States who participated in a smartphone app survey between March and October 2020, nearly 2,700 reported at least one episode of fever and chills. But according to a report published in JAMA Network Open, only a small fraction reported receiving a COVID-19 test result within seven days of the onset of illness. At first, as tests became more accessible, the numbers improved. In early April 2020, less than 10% of survey participants reporting illness with fever received test results within a week. By late July, that proportion had increased to 24.1%. Throughout the summer and fall, as tests became easier to find, the number of sick participants who reported getting tested remained flat. By late October, only 26% reported receiving a test result within a week of febrile illness. “It’s shocking to me that when people have a fever they’re still not getting tested,” said coauthor Dr. Mark Pletcher of the University of California, San Francisco. “Tests are easy to come by. People might have coronavirus, might be spreading it to their friends and neighbors, and they’re not getting tested.”