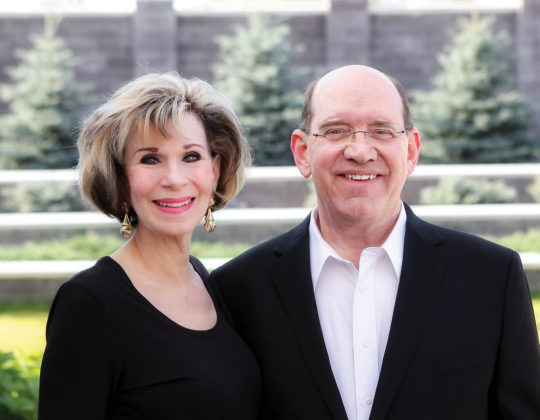 Tomorrow, Friday, September 27th at 11 am Jim and Lori Bakker will be hosting Rick and Denise Renner, senior pastors of the Moscow Good News Church in Russia on The Jim Bakker Show.  We are thrilled to also announce that the Renners will be on Grace Street for a very special evening service that will be live-streamed beginning at 7 pm. Denise, a classically trained vocalist will begin the service and Rick will be our guest speaker.

It takes incredible faith to embrace what the Lord asks of us and a great deal of strength to follow our calling. For Rick and Denise Renner that calling began January, 1991, when the Renners and their sons — Paul (then 8), Philip (then 6), and Joel (then 2) — left behind all they knew to relocate their family to serve the region that only weeks earlier had become the former Soviet Union. The following year, Rick moved forward to launch and establish the first of its kind — and eventually the largest — Christian television network in that region of the world.

Over the years, Rick and Denise have pioneered three churches, a Bible school, and a ministerial association that serves thousands of Russian-speaking pastors throughout the former USSR as well as parts of the Middle East. They have had their hand in many outreach services specifically ministering to the needs of orphans, women prisoners, the homeless, and drug-and-alcohol addicts.

Rick Renner is a highly respected teacher and author within the Christian community, both in the U.S. and abroad. His teaching ministry is widely acknowledged as extraordinarily insightful and clear as he lays a foundation of sound doctrine while drawing out rich meanings from the original Greek language.

Rick has authored more than 30 books in English and Russian, many of which have also been translated into German, French, Ukrainian, and Portuguese. His best-selling titles include Sparkling Gems From the Greek, Volume 1 and Volume 2 and Dressed To Kill — A Biblical Approach to Spiritual Warfare and Armor, which have sold more than 3,000,000 copies combined.

Rick’s new book, How to Keep Your Head on Straight in a World Gone Crazy: Developing Discernment for These Last Days has recently been released. Within the pages of this timely book Pastor Jenner points out that we are living in a day when countless multitudes have lost their way both morally and spiritually. Like a ship without an anchor, this last-days generation is being tossed to and fro by a flood of deception and wrong influences that is tragically causing people to lose their moorings. What should we do to make sure we don’t get sucked into the chaotic swirl of moral and spiritual confusion sweeping the world today?  This book helps us look to God to find the answers.

If you are unable to attend The Jim Bakker Show live taping with Rick and Denise Jenner please tune in when it airs. You won’t want to miss it.  Also please join us tomorrow evening for the Livestream service on Grace Street beginning at 7 pm on the PTL Network from your Roku, Apple TV, Amazon Fire TV or on jimbakkershow.com or ptlnetwork.com as well as on Facebook live located on The Jim Bakker Show facebook page.

2 thoughts on “A Christian View from Russia, Rick and Denise Renner on The Jim Bakker Show; join us for the Livestreamed evening service!”