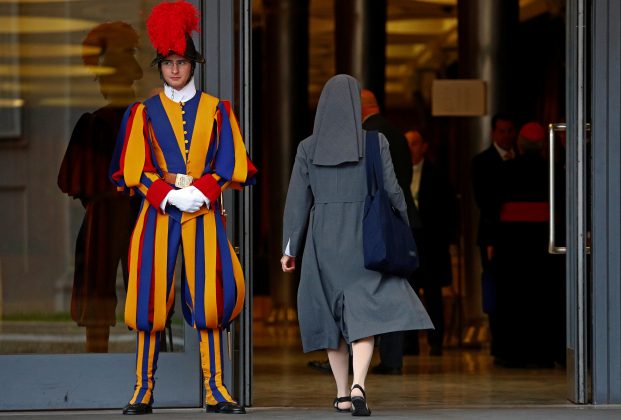 VATICAN CITY (Reuters) – Catholic women say there’s a clerical stained glass ceiling in the Vatican, and they want to shatter it.

They want to vote in major policy meetings. They want Pope Francis to deliver on his promise to put more women in senior positions in the Holy See’s administration. And some of them say they want to be priests.

“Knock knock! Who’s there? More than half the Church!” several dozen Catholic women chanted outside the Vatican on Oct. 3, the first day of this year’s synod of bishops from around the world.

The role of women in the Church has been a recurring theme at the month-long meeting, which brings together some 300 bishops, priests, nuns and lay participants. Only about 35 are women.

The subject has come up in speeches on the floor, in small group discussions and at news conferences by participants in the gathering, officially titled “Young People, Faith and Discernment of Vocation”.

Only “synod fathers”, including bishops and specially appointed or elected male representatives, are allowed to vote on the final recommendations to be sent to the pope, who will take them into consideration when he writes his own document. Other participants are non-voting observers, auditors or experts.

Some of the attendees have pointed to what they say is a contradiction in the rules of the synod, which takes place every few years on a different theme.

This year, two “brothers”, lay men who are not ordained, are being allowed to vote in their capacity as superiors general of their religious orders.

But Sister Sally Marie Hodgdon, an American nun who also is not ordained, cannot vote even though she is the superior general of the Sisters of St. Joseph of Chambery.

“I am a superior general. I am a sister. So in theory, logically you would think I would have the right to vote,” Hodgdon, who is also vice president of the International Union of Superiors General (UISG), an umbrella group of Catholic nuns, told reporters.

The membership of female religious orders is about three times larger than that of male orders. 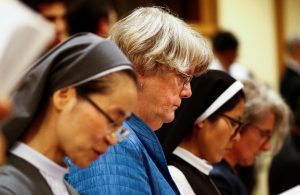 GENDER IN THE CHURCH

A petition demanding that women have the right to vote at synods has collected 9,000 signatures since it opened online at the start of this meeting. It is sponsored by 10 Catholic lay groups seeking change in the Church, including greater rights for women and gays and a bigger role for the laity.

The cause has won some influential clerical male backers.

At a news conference on Oct. 15, superiors general of three major male religious orders – the Jesuits, the Dominicans and one branch of the Franciscans – expressed support for changes in synod rules in order to allow women to vote in the future.

Backing also came from Cardinal Reinhard Marx, archbishop of Munich, president of the German Bishops Conference and one of the most influential Catholic leaders in Europe.

“We must face up to the often uncomfortable and impatient questions of young people about equal rights for women also in the Church,” Marx said in his speech to the synod.

“The impression that the Church, when it comes to power, is ultimately a male Church must be overcome in the universal Church and also here in the Vatican. It is high time.”

The Holy See, as the offices of the central administration of the 1.3 billion-member Church are known, and the State of Vatican City have a combined work force of about 4,100 people. About 700 are women.

Of the approximately 60 departments in the Holy See, about 10 must be headed by priests because they deal with governance and jurisdiction over other ordained ministers or other sensitive doctrinal matters, the Church says.

Francis has promised to put more women in senior roles in those other 50 departments. But more than five years after he was elected, there are only six women in such roles. Five are lay women and one is a nun. None of them heads a department.

Francis told Reuters in June he had to “fight” internal resistance to appoint 42-year-old Spanish journalist Paloma Garcia-Ovejero as deputy head of the Vatican’s press office.

He declined to name those who had resisted, but said he had to use “persuasion,” an apparent reference to the powerful conservative wing of what has been an institution run exclusively by males for 2,000 years.

The Vatican Museums, which are part of the State of Vatican City, are headed by Barbara Jatta, the first woman to hold the high-profile post which oversees nearly 1,000 employees.

The pope’s critics, including former Irish President Mary McAleese, say he is moving too slowly.

“How long can the hierarchy sustain the credibility of a God who wants things this way, who wants a Church where women are invisible and voiceless in Church leadership?” she said at a conference in Rome in March.

Sister Maria Luisa Berzosa Gonzalez, one of the participants at the current synod, thinks it is time for change – in the synod, and in the wider Church.

The Spanish nun, whose energy belies her 75 years, has dedicated her life to educating the poor and underprivileged in Spain, Argentina and Italy and is still going strong.

“With this structure in the synod, with few women, few young people, nothing will change. It should no longer be this way. Its participation should be broadened,” she told Reuters.

Berzosa, who took her vows in 1964, said she supports a female priesthood, a position not very common among nuns her age.

The Church teaches that women cannot become priests because Jesus chose only men as his apostles.

Proponents of a female priesthood, like 32-year-old Kate McElwee, who organised the protest on the synod’s opening day, say Jesus was merely acting according to the norms of his times.

“Some women feel called by God to be priests. They discern a vocation to the priesthood just as men do,” said McElwee, the Rome-based executive director of the Women’s Ordination Conference, a U.S. lobbying group.

McElwee has found kindred spirits in nuns like Berzosa.

The nun said she knows women won’t be priests in her lifetime because change comes slowly and piecemeal in the Church.

Still, between one easy laugh and another, her frustration slipped through.

“I lead spiritual exercises, I develop a deep rapport with people, I teach them how to pray, and then someone else comes along to say the Mass,” Berzosa said. “It’s not fair.”