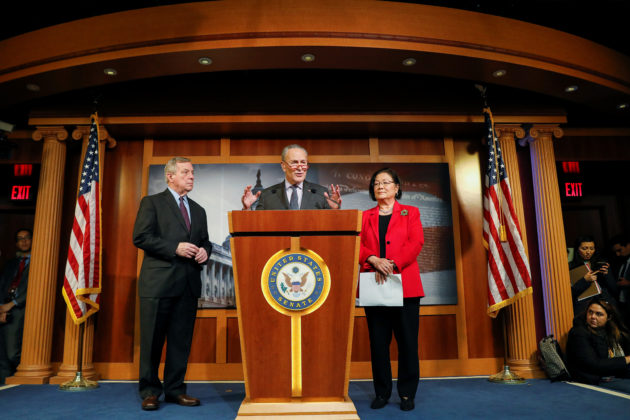 By James Oliphant and David Morgan

WASHINGTON (Reuters) – President Donald Trump’s impeachment trial faces a climactic vote on Friday, when senators are due to decide whether to call witnesses and prolong the historic proceedings or instead bring them to the swift conclusion and acquittal that Trump wants.

Democrats need to persuade four Republicans to vote with them in the Senate in order to call witnesses such as John Bolton, Trump’s former national security adviser. Senator Mitt Romney, the 2012 Republican presidential nominee and sometime critic of Trump, on Friday became the second Republican senator to state support for voting for witnesses, joining fellow moderate Susan Collins.

Barring an unforeseen change of heart by another Republican senator, that would leave Democrats short of the 51 votes they need and allow Trump’s allies to defeat the request for additional evidence and move toward a final vote that is all but certain to acquit the president and leave him in office.

That final vote could take place late on Friday or on Saturday, congressional sources said.

Republican Senator Lamar Alexander, who had been undecided, said late on Thursday that Democrats had proven the case against Trump but that the president’s actions did “not meet the United States Constitution’s high bar for an impeachable offense.”

Senate Democrats have been arguing throughout the two-week proceedings that lawmakers need to hear from witnesses in order for it to be a fair trial. This would be the first Senate impeachment trial in U.S. history with no witnesses, including trials of two prior presidents and a number of other federal officials.

Democratic Senator Jeff Merkley said a trial barring witnesses and new evidence would be a “kangaroo court” and a “tragedy in every possible way.”

The Democratic-controlled House of Representatives impeached Trump in December, formally charging him with abuse of power for asking Ukraine to investigate a political rival, Democratic presidential candidate Joe Biden. The House also charged Trump with obstruction of Congress for blocking current and former officials from providing testimony or documents.

“The truth is staring us in the eyes,” Democratic Representative Adam Schiff, the lead House prosecutor, said on the Senate floor.

“We know why they don’t want John Bolton to testify. It’s not that we don’t really know what’s happened here. They just don’t want the American people to hear it in all of its ugly, graphic detail.”

Trump is only the third president in U.S. history to be impeached. A vote of two-thirds of the Senate is required to remove him from office and no Republicans have yet indicated they will vote to convict.

Trump’s Republican allies have tried to keep the trial on a fast track and minimize any damage to the president, who is seeking re-election on Nov. 3. Trump’s acquittal would allow him to claim vindication just as Democrats hold the first of the state-by-state nominating contests on Monday in Iowa to choose the party’s nominee to challenge Trump in the election.

The president held a rally in Des Moines, Iowa, on Thursday night and denounced the impeachment trial, calling it an effort by Democrats to overturn his 2016 election victory.

“They want to nullify your ballots, poison our democracy and overthrow the entire system of government,” Trump told his supporters.

On Friday, the Democrats prosecuting Trump and the president’s lawyers are expected to present closing arguments before the Senate votes on whether to call witnesses.

Contradicting Trump’s version of events, Bolton wrote in an unpublished book manuscript that the president told him he wanted to freeze $391 million in security aid to Ukraine until Kiev pursued investigations of Democrats, including Biden and the former vice president’s son, Hunter Biden, the New York Times reported.

Bolton’s allegations go to the heart of impeachment charges against Trump. Democrats have said Trump abused his power by using the security aid – passed by Congress to help Ukraine battle Russia-backed separatists – as leverage to get a foreign power to smear a political rival.

U.S. Secretary of State Mike Pompeo, on a visit to Kiev, emphasized U.S. support for Ukraine.

Pompeo, the highest-ranking U.S. official to travel to Ukraine since the impeachment began, also denied that Ukrainian President Volodymyr Zelenskiy would be granted a visit to the White House to meet Trump only if Ukraine agreed to announce an investigation of Hunter Biden.

If further witnesses and documents are permitted, Republicans have threatened to call either Joe or Hunter Biden and perhaps the whistleblower within the intelligence community whose complaint about Ukraine led the House to begin its investigation.

If the vote on whether to allow witnesses is 50-50, Chief Justice John Roberts could step in to break the tie. But there is so little precedent for impeachment trials that Senate aides said there was no way to know exactly what would occur.

Merkley said he did not expect Roberts to break a tie. “He’s not taking a stand for the institutions of the United States,” Merkley said.

If Roberts declines to break a tie, the deadlock would mean a defeat for Democrats.