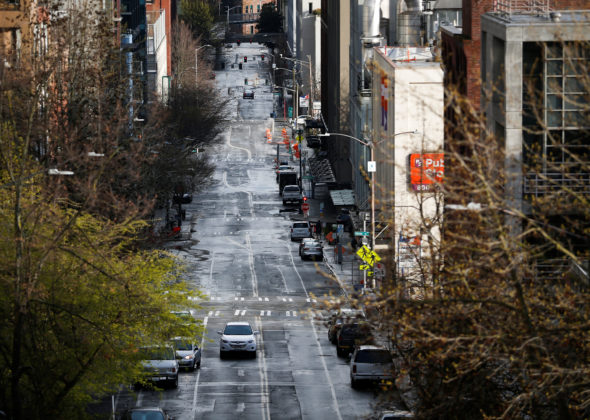 By Doina Chiacu and Susan Heavey

WASHINGTON (Reuters) – A record 6.6 million Americans filed for unemployment benefits last week, the U.S. government said on Thursday, after another four states told residents to stay at home in the latest signs of the human and economic cost of the coronavirus.

Initial jobless claims rocketed as more states imposed stay-at-home orders, forcing large and small businesses to curtail output or shut altogether. More than 80 percent of Americans in 39 states are now under orders to remain at home to contain the spread of the virus.

Florida, Georgia, Mississippi and Nevada told residents to stay home on Wednesday, when the death toll soared by 925 to more than 4,800 nationwide. Confirmed U.S. cases climbed to 214,000, nearly double that of Italy, with the second most.

Globally, the number of confirmed infections approached 1 million with nearly 47,000 fatalities, led by Italy with over 13,000 dead.

More gloomy news came on Thursday when the Labor Department reported a whopping 6.6 million people filed for jobless claims in the past week, double the previous record set a week ago.

“It takes your breath away,” said Justin Hoogendoorn, head of fixed income strategy and analytics at Piper Sandler in Chicago. “Obviously the immediate reaction to something like that is going to be fear, especially when (jobless claims) were just about double what economists were even predicting, thinking dire scenarios.”

The new evidence of the pandemic’s impact on the economy follows a growing consensus by health experts that the respiratory illness could kill 100,000 to 240,000 people even if lockdown orders remain in place and Americans abide by them.

To deal with the mounting number of fatalities, the U.S. Defense Department is looking to provide up to 100,000 body bags after the Federal Emergency Management Agency placed an order for that many, a Pentagon official told Reuters on Wednesday.

New York City crematories are extending their hours, burning bodies into the night, with bodies piling up so quickly that city officials are surveying cemeteries elsewhere in the state for temporary interment sites.

Funeral homes and cemetery directors describe a surge in demand unseen in decades as COVID-19 cases, the respiratory ailment caused by the novel coronavirus, surpassed 40,000 infections in the city, killing more than 1,000.

“We’ve been preparing for a worst-case scenario, which is in a lot of ways starting to materialize,” said Mike Lanotte, executive director of the New York State Funeral Directors Association.

NEW ORLEANS HIT HARDThe coronavirus is even more lethal in New Orleans, which has a per-capita death rate much higher than in New York City. Doctors, public health officials and available data say the Big Easy’s high levels of obesity and related ailments may be part of the problem.

The outbreak will get worse and social distancing is the only way to contain it, said Dr. Anthony Fauci, director of the National Institute for Allergy and Infectious Diseases.

“We just have to do it,” Fauci told NBC’s Today show on Thursday. “That is our major weapon against this virus right now. We don’t have a vaccine that’s deployable. This is the only thing we have.”

He called on U.S. states to review the exemptions they have granted to their stay-at-home orders when he was asked whether businesses such as hair salons and florists should remain open.

“I urge the people at the leadership at the state level to really take a closer look at those kinds of decisions,” Fauci said.

U.S. Senate Democratic Leader Chuck Schumer of New York called on Trump to follow suit and appoint a national czar with military experience to oversee the production and distribution of medical supplies.

“The system that the administration has in place is horrible,” Schumer told MSNBC, adding he would send a letter to Trump later on Thursday.

Fellow Democratic Senator Dick Durbin echoed Schumer, telling CNBC, “We are begging, pleading, scratching around at every way, shape or form to bring in the protective equipment that we need” for his state of Illinois.

Trump tweeted that New York has received more federal aid than any other state and said the man he describes as “Cryin’ Chuck Schumer” and local officials should stop complaining, saying they should have stocked up long ago.

Trump also said on Twitter that 51 large cargo planes with medical supplies were on their way to the states and the federal government was “sending many ventilators today” without giving details.