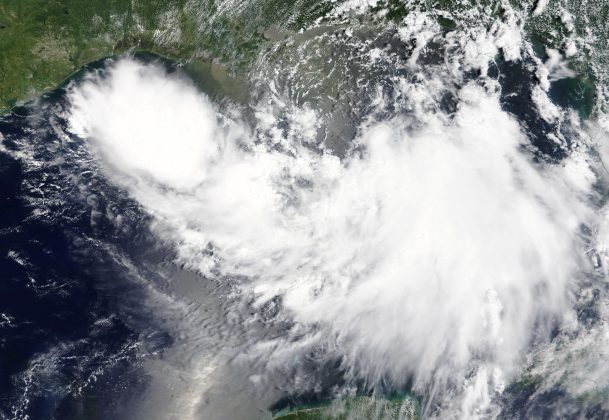 Tropical Storm Barry is shown in the Gulf of Mexico approaching the coast of Louisiana, U.S. in this July 11, 2019 NASA satellite handout photo. NASA/Handout via REUTERS

NEW ORLEANS (Reuters) – Some residents and visitors prepared to flee New Orleans on Thursday as Tropical Storm Barry closed in and officials warned of “extreme rain” and flooding if the storm makes landfall by early Saturday as the first Atlantic hurricane of 2019.

City officials urged residents to shelter in place rather than evacuate as the storm had maximum sustained winds of 40 miles per hour (64 kph) as of 2 p.m. CDT (1900 GMT) on Thursday, the National Weather Service said.

Forecasters issued a storm-surge warning of up to 6 feet (1.8 m) for a stretch of Louisiana coastline south of already-sodden New Orleans stretching from the mouth of the Atchafalaya River to Shell Beach. Rain was an equal danger, given that the lower Mississippi River, which runs through New Orleans, has been above flood stage for six months.

The lower Mississippi is forecast to peak at 19 feet (5.9 m) on Saturday, the highest it has been since 1950, according to the National Weather Service.

“The more information we get, the more concerned we are that this is going to be an extreme rain event,” Louisiana Governor John Bel Edwards said at an afternoon news conference. “If Tropical Storm Barry becomes a hurricane, it would be the first time we’ve had the hurricane hit the state with rising rivers.”

He said he expected the storm to measure a Category 1, the lowest rung on the five-step Saffir-Simpson scale of hurricane wind strength, when it comes ashore.

The slow-moving storm was located about 90 miles (145 km) south of the mouth of the Mississippi River at 2 p.m., the National Hurricane Center said.

Meteorologists predicted between 10 and 20 inches (25 and 50 cm) of rain would fall on the Gulf Coast on Friday and Saturday from East Texas through New Orleans and the Louisiana coast.

‘CANNOT PUMP OUR WAY OUT’

New Orleans Mayor LaToya Cantrell warned that 48 hours of heavy rainfall could overwhelm the pumps the city uses to fight floodwater, leading to flooding as early as Friday morning.

“We cannot pump our way out of the water levels that are expected to hit the city of New Orleans,” Cantrell said. “We need you to understand this.” 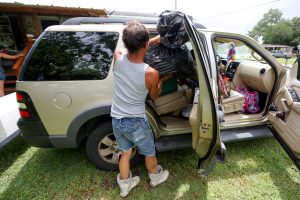 Water pumps already were working at capacity after heavy rains, she said.

Oil companies have shut a third of offshore Gulf of Mexico production ahead and a coastal refinery was set to shut down due to an evacuation order prompted by the storm, pushing oil and gasoline prices higher.

Cantrell said no official evacuation orders were being issued but urged people to gather supplies, secure their property and shelter in place.

But some in New Orleans, hard hit when Hurricane Katrina swamped the city in 2005 and killed 1,800 across the region, were getting out.

In the city’s Bywater neighborhood a block from the Mississippi River, Betsey and Jack Hazard were preparing to repair a fence around their house and flee with their two small children to Mississippi.

“It’s really the river that has us worried,” said Betsey Hazard, saying she feared it could overtop the nearby levee. “They say that the river won’t flood in New Orleans but we have a 5-year-old and a 10-month-old, and we don’t want to take any chances.”

In the normally bustling French Quarter, popular with tourists, only a couple of tables were occupied at the coffee-and-beignet restaurant Caf&eacute; du Monde.

Kate Clayson of Northampton, England, and her boyfriend Maxx Lipman of Nashville, Tennessee, said they had arrived on Wednesday for a vacation but were planning to depart on Thursday.

“The woman at our Airbnb said the water came up to the first step of our house yesterday so we’ve just decided we&rsquo;d better get out,” Clayson said.

The storm will become Hurricane Barry if it reaches wind speeds of 74 mph (119 km) as expected when it makes landfall near the mouth of the Mississippi River and just west of New Orleans.

The National Weather Service said the city had received 6 to 9 inches (15 to 23 cm) of rain by Thursday morning, causing dramatic flooding in the area, including on Bourbon Street in the city’s historic French Quarter.