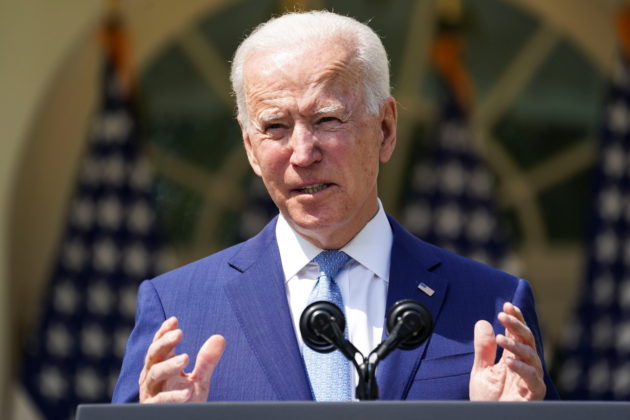 By Steve Holland and Jeff Mason

WASHINGTON (Reuters) -President Joe Biden and his Attorney General Merrick Garland announced limited measures to tackle gun violence in the United States on Thursday, in what the White House described as a first step to curb mass shootings, community bloodshed and suicides.

The new measures include plans for the Justice Department to crack down on self-assembled “ghost guns” and make “stabilizing braces” – which effectively turn pistols into rifles – subject to registration under the National Firearms Act.

Biden said he will ask the Bureau of Alcohol, Tobacco, Firearms and Explosives to release an annual report on firearms trafficking in the United States, and make it easier for states to adopt “red flag” laws that flag at-risk individuals who own guns.

Biden also outlined more ambitious goals that he needs the support of Congress to accomplish, including reintroducing a ban on assault weapons, lifting an exemption on lawsuits against gun manufacturers, and passing a nationwide red flag law.

The executive orders unveiled on Thursday are not legislative.

“Today we’re taking steps to confront not just the gun crisis, but what is actually a public health crisis,” Biden said, speaking in the Rose Garden to an audience filled with family members of victims of gun violence.

He noted another mass shooting in South Carolina this week.

“This is an epidemic, for God’s sake, and it has to stop,” Biden said.

Biden, a Democrat who has a long history of advocating for gun restrictions, has come under pressure to step up action after recent mass shootings in Colorado and Georgia.

Biden announced the measures alongside Vice President Kamala Harris and Merrick Garland, who Biden said would prioritize gun violence as head of the Department of Justice (DOJ).

“We’ve had more tragedy than we can bear,” Harris said. “People on both sides of the aisle want action …. So all that is left is the will and the courage to act.”

The DOJ will issue a proposed rule on ghost guns in 30 days, and proposed rules on stabilizing braces and a model ‘red flag’ law for states within 60 days.

Garland said the department will also be rethinking the way that it analyzes criminal cases and investigations to try learn more about modern gun-trafficking patterns.

“Modern guns are not simply cast or forged anymore, but can also be made of plastic, printed on a 3D printer, or sold in self-assembly kits,” Garland said.

Gun control is a politically divisive subject in the United States, which has experienced a significant number of deadly mass shootings at schools and other public venues for decades.

A series of gun control measures have failed in Congress, however.

The U.S. Constitution’s Second Amendment protects the right to bear arms, and state attempts to limit who can buy guns or how they can carry them have been challenged in court by pro-gun lobby groups.

“Everything that is being proposed today is totally consistent with the Second Amendment,” Biden said. “And there’s a wide consensus behind the need to take action.”