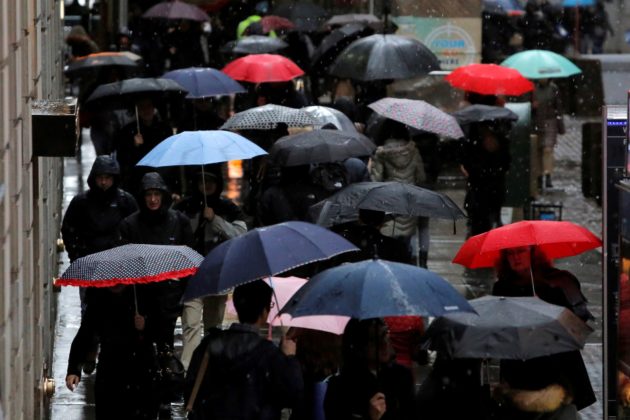 (Reuters) – Wage inequality has soared in many of the United States’ biggest cities over the past 35 years as companies cluster in urban centers, driving big paychecks for in-demand workers, according to a report by the New York Federal Reserve

At the same time, a broad swath of Americans in the very same cities is being left behind, with wage increases for low- to middle-wage employees failing to keep pace with the dramatic gains by high-end workers.

Cities such as New York, Houston and San Francisco have moved to near the top of the rankings in recent years in terms of wage inequality, the report by economists Jaison Abel and Richard Deitz released on Monday found.

Economic inequality has been rising across the United States as globalization and automation eliminate some middle-income jobs and highly skilled workers in technology, finance and other sectors win higher wage premiums.

The changes are making city life more challenging for lower wage workers, who are struggling to keep up with rising housing costs and other bills.

“For people in these lower paid occupations, it’s less appealing,” said Nick Bunker, an economist at Indeed Hire Lab. “There are fewer opportunities.”

Cities with “sluggish economies” tended to have weaker wage gains for all workers, but also lower levels of inequality than larger cities, the researchers found.

This is especially true in cities where the main industries are struggling financially, like Detroit, where automation and auto plant closures have led to job losses.

While areas such as the thriving tech sector in the San Francisco-San Jose region have moved up the rankings, some cities with the most or least inequality in 1980 were still marked by extremes 35 years later.

Fairfield, Connecticut, about 50 miles northeast of New York City and home to General Electric’s headquarters from the 1970s until 2016, had the starkest wage gap between rich and poor in both 1980 and in 2015.

The disparity, however, has become more dramatic. In 1980, a Fairfield resident with earnings in the top 10% made nearly six times as much as a neighbor in the bottom 10%. By 2015, those on the high end earned nine times as much.

Bakersfield and Santa Cruz in California also had persistently high levels of inequality, the report found.

At the other end of the spectrum, cities such as Erie, Pennsylvania, Utica-Rome, New York, and Sheboygan, Wisconsin, had some of the lowest levels of inequality.

Lower wage workers have less leverage than they did in previous generations because unions are weaker now, said Josh Bivens, research director for the Economic Policy Institute. Long periods of high unemployment have also limited workers’ ability to push for better pay, he said.

“In the last 30 years, lots of those things that provided wage growth for low- and moderate-wage workers have been stripped away,” Bivens said.

Recent trends in the labor market may provide some relief,he said. Some states and cities have approved minimum wage increases in the past couple of years, while a tight labor market has also helped to create better opportunities for some low and middle wage workers.

But those improvements are likely not enough to close the gap, Bivens said.