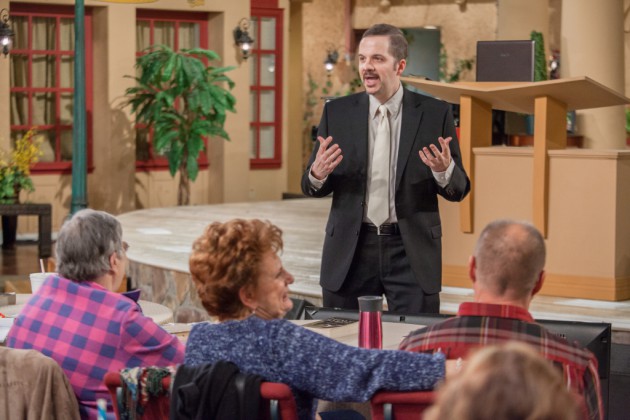 Ten years ago, Michael Snyder never could have imagined he would be speaking at the 2016 Prophetic Conference. By his own admission, he was a relatively low-profile lawyer who was living in the nation’s capital — where attorneys are about as common as politicians.

His wife would drive him to the Metro station every morning, and he would hope there was a train seat waiting for him during the busy morning rush hour. Once he arrived at work, he would sometimes stay there for 10 to 12 hours, to help pay off the debts he and his wife had accrued.

It was far from the glamorous lifestyle people might imagine a lawyer in Washington may have.

“If there was a totem pole of lawyers, I was so low I was beneath the totem pole,” Snyder told those gathered at Morningside on Thursday evening. “I was the lowest of the low.”

Snyder and his wife were resigned to the idea this would be their life. He would keep working at a job that he didn’t particularly enjoy, in order to chip away at debts he wished he never acquired. But, in the back of their minds, he and his wife believed that God had something bigger planned for them. They did not quite understand what, exactly, but they kept believing it had to be there.

Eventually, Snyder turned to the Internet. He founded “The Economic Collapse Blog” in late 2009, and slowly built a following by penning articles about the economy and current events.

After praying on it, he and his wife eventually decided to move across the country — first to Washington state, and later to the mountains of Idaho where they now live. All the while, they felt God’s blessing on Snyder’s work and he saw his articles reaching more and more people.

Snyder says he now gets more than 1 million page views a month from all over the world.

And now here he was, standing on Grace Street and preaching an evening service that was being live-streamed to a global audience. It was a far cry from his relative anonymity of a decade ago.

That was the crux of Snyder’s message, in that he believes God is currently “raising up a remnant” for the last days. He calls it a global “organic move of God” that transcends all denominations and churches, and consists of people of a variety of backgrounds and faiths. Its members will be proclaiming warnings and Gospel messages at an important time.

“This remnant is going to keep the commandments of God. It’s going to bring in the greatest harvest of souls the world has ever seen. And it’s going to move in the power of the Holy Spirit like we haven’t seen since the Book of Acts,” Snyder said, drawing applause from the crowd.

Snyder believes that God is moving outside the institutional churches for this remnant because many of those churches have failed, having gradually moved away from the Word of God in favor of a prosperity gospel. He cited studies about dismal attendance during Sunday worship services, and said that the church hasn’t done a good job of attracting the younger generations.

He delivered a spirited message to “dead churches” across the United States.

Snyder said one of his readers recently alerted him to the fact that more than 40 years ago David Wilkerson gave a similar prophecy about the coming rise of a “supernatural church of true believers” that would involve many different denominations and emphasize the coming of Jesus.

Though Snyder believes God has played a major role in his life, transforming him from a lawyer into an unconventional preacher, he does not necessarily consider himself part of any remnant just yet. Snyder and his wife constantly pray God will factor them into His plans for the last days, and encouraged anyone else who wants to be a part of the remnant to “get right with God.”

“We can’t do it on our own, but with God’s help I believe that we can become the kind of bride that Jesus deserves,” Snyder said to end his service. “The half-hearted, lukewarm religion that we call Evangelical Christianity in America today has got to go. It’s not going to cut it anymore. We are going to be on fire for God!

“So my invitation is come and join with me. The remnant is rising. You don’t have to join an organization. You don’t have to send your money anywhere. All you have to do is listen to the call of God. It’s not complicated, but let’s do it. Let’s be the people that God created us to be! We’re going to write the end of the Book of Acts. It’s going to be the finest hour for the church, and I want to be there right on the front lines! Do you?”

Snyder’s inspirational service also touched on scriptures about the last day and the timing of the rapture. It can be seen on the Prophetic Week DVD Set, which is now available.

The set also contains evening services from Rabbi Jonathan Cahn, Joel Richardson and Hubie Synn along with all of The Jim Bakker Show tapings that were recorded during this week’s 2016 Prophetic Conference.

7 thoughts on “Michael Snyder: God “raising up a remnant” for last days”