Click Here To Get Started!
The Jim Bakker Show 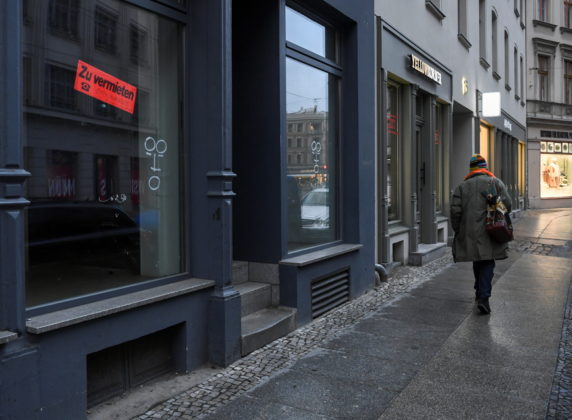 FILE PHOTO: A vacant shop with a "for rent" sign is seen in the city centre, amid the coronavirus disease (COVID-19) pandemic, in Berlin, Germany, January 7, 2021. REUTERS/Annegret Hilse

By Claudia Cristoferi and John Revill

ROME/ZURICH (Reuters) – Governments across Europe announced tighter and longer coronavirus lockdowns and curbs on Wednesday amid fears of a fast-spreading variant first detected in Britain, with vaccinations not expected to help much until the spring.

Vaccines are being rolled out across the continent, but not as quickly as many countries had wished, and the effects are not expected until inoculations are widespread among the population.

Italy will extend its COVID-19 state of emergency to the end of April, Health Minister Roberto Speranza said as infections show no sign of abating.

Switzerland announced tighter measures to tackle new variants of the COVID-19 virus and extended the closure of restaurants, cultural and sport sites by five weeks to run until the end of February.

Germany is also likely to have to extend COVID-19 curbs into February, Health Minister Jens Spahn said, stressing the need to further reduce contacts to fend off the more infectious variant first identified in Britain.

The German cabinet approved stricter entry controls to require people arriving from countries with high caseloads or where the more virulent variant is circulating to take coronavirus tests.

Chancellor Angela Merkel told a meeting of lawmakers on Tuesday that the coming 8 to 10 weeks would be very hard if the more infectious variant spread to Germany, according to a participant at the meeting.

Health Minister Spahn told Deutschlandfunk radio it would take another two or three months before the vaccination campaign really started to help.

The Dutch government said late on Tuesday it would extend the lockdown, including the closure of schools and shops, by at least three weeks until Feb. 9.

“This decision does not come as a surprise, but it is an incredible disappointment,” Prime Minister Mark Rutte told a news conference, adding that the threat posed by the new variant was “very, very worrying”.

He said the government was considering imposing a curfew, but was reluctant and had sought outside advice before deciding on such severe restrictions.

In France, President Emmanuel Macron was discussing possible tighter rules with senior ministers. A nationwide curfew could be brought forward to 6 p.m. from 8 p.m., as has already happened in parts of the country, French media reported.

The French government’s top scientific adviser said new restrictions were needed in light of the variant first detected in Britain, adding that if vaccines were more widely accepted the crisis could be over by September.

“The coming three months will be difficult, the situation will slightly improve during the spring but should really get better at the end of the summer,” Jean-François Delfraissy told franceinfo radio.

In Switzerland, officials cancelled the Lauberhorn World Cup downhill race, out of fear that the new variant – brought in by what health authorities said was a single British tourist – was spreading now spreading rapidly among locals.

At least 60 people have tested positive in the Alpine resort of Wengen in the last four weeks.

Switzerland, which has so far taken a lighter touch to restricting business and public life than its neighbors, said it will close shops selling non-essential supplies from Monday.

It also ordered companies to require that employees work from home where possible. The country also eased rules on allowing pandemic-hit businesses to apply for state financial aid in hardship cases.

There was more optimistic news from Poland, where COVID-19 case numbers have stabilized after surging in the autumn.

“I hope that in two to three weeks the restrictions will be a little smaller, the vaccine will work,” Poland’s Finance Minister Tadeusz Koscinski said in an interview for Money.pl.