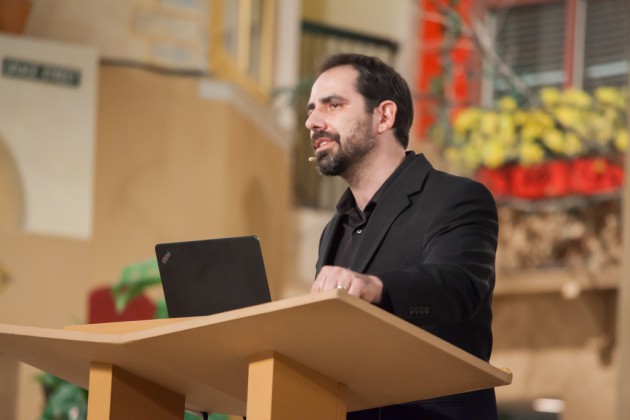 Isaiah 25:7-8 (NCV) 7 On this mountain God will destroy the veil that covers all nations; the veil that stretches over all peoples; 8 he will destroy death forever. The Lord God will wipe away every tear from every face. He will take away the shame of his people from the earth. The Lord has spoken.

On our first exciting evening service for the prophetic conference here at Morningside, Joel Richardson began his message with one clear word on the prophetic.

“You don’t need to be a prophet to understand the big picture. For the finer details, yes you might need to be one, but in terms of understanding what’s unfolding right now all over the world, it is actually very simple. There is a storm brewing.”

Joel Richardson knows when a storm is coming. As the son of a fisherman, he grew up in an area plagued by hurricanes, Now he lives in the midwest where storms can come up quickly and produce destructive tornadoes. Joel explained that hurricanes begin as a tropical storm, far away, The storm is out there, swirling in the ocean. Then 2 , 3 or 4 days down the road you see the entire coast engulfed in this massive storm system and on alert. You can look on a map and see the hurricane swallowing half of the country.

According to Pastor Richardson, “If we want to understand the story of what is happening in our world right now we have to begin by understanding the basic story of the Bible, which is this: The God of Heaven and Earth has made a promise, He has made vows, He has actually made vows unto death, and these promises have to do with what is happening right now. These promises involve a very specific piece of real estate; a very specific spot on the map that is called the city of Jerusalem, in the nation of Israel. The nation of Israel is like a tropical storm right now, and the storm is beginning to brew and to swirl.”

Richardson explained that the scriptures teach that eventually the storm that begins around Jerusalem, the rage of Satan against the fulfillment of God’s promises, will pull every nation on earth into its destructive power.

“The storm is already beginning, we are already starting to feel the winds of this storm. This is a storm that eventually will affect everyone on this earth. This will be an economic storm, it will be a storm that will affect nature with natural disasters, it will be a military storm, there will be very real wars. Beyond that it is a theological storm, an ideological storm. This storm will involve deception and this is one of the first things that we need to be made aware of.”

Joel stressed that before we feel the winds of decimation we will, even in the church, feel the winds of deception. He warned against the danger of believing in replacement theology. A theology that states in effect, that the church has superseded Israel; that God has transferred his plans and purposes from Israel to the church. When in fact, God made these promises to Jerusalem over and over in His Word. Israel is his Jewel and it in the city of Jerusalem that Jesus will have His throne.

Listening to Joel speak is always compelling.The biblical knowledge on Israel and on her enemies are an incredible gift to understanding God’s plans. Joel describes Jesus as sitting on the right hand of God, now, interceding for us. He is waiting…His heart is burning. He wants to come back more than WE want him to come back. And it is almost time.

In closing, Joel Richardson tells us all to keep our eyes on the Middle East and be wary of the winds that we feel from there.

“It is right in front of us, the battle… the storm. Watch Israel. Watch Jerusalem.”

There is a storm brewing.

Our Prophetic Week DVD is now available containing every taping of the Jim Bakker Show with all of our amazing guests, as well as Morningside’s inspirational evening services including Joel Richardson during Prophetic week 2016.